Certainly, death is not a lighthearted topic of discussion; however, it is one that every genealogist focuses upon. BMD: birth, marriage, and death are the three dates of our ancestors’ lives that we record and include in our family trees.  And to paraphrase Benjamin Franklin, there are only two things in life that are certain: death and taxes.  So, what do German records (church records in particular) tell us about the demise of our ancestors beyond just the date?

As we are all aware, there are two different types of records that we can find:  narrative, paragraph style and columnar.  Each entry in a handwritten paragraph-style death entry obviously would include the name of the deceased, his date of death, most likely, his date of birth, perhaps the name of his/her spouse or parents and with any luck, the date of the burial and the place where the deceased was laid to rest.  It is most common to find these paragraph style records in the 18th century, but as time passed, the church leaders advocated a more uniform method of recording this information, and the records were recorded in columns that were mandated in all churches by the regional administration of the church, both Protestant and Catholic.

While the information in columnar records is virtually the same as mentioned above, there is one column that became more and more prevalent as time moved on.  And that is the column header Todesursache or Todesart, the cause of death or the type of death.  It is in this column that we find extremely interesting information about our ancestors and the era in which they lived.  Sadly, narrative records only rarely contain information on the cause of death, but a few do exist, as shown in this example:

The cause of death of Christian Topp, widower, can be found in the second line:  Todesart:  Lungenentzündung- Type of Death: inflammation of the lungs (probably pneumonia or bronchitis).

Here is an example of the headers from a church death register:

The second to last column is unique in that the header states Ursache des Todes (Cause of Death) and allows the scribe to choose between Krankheit (illness) or Zufall (accident).  Most of the death registers that I have seen only have the header Todesursache (Death Cause) and require the scribe to enter that information, not to just check whether it was caused by illness or accident. 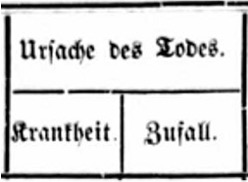 Unfortunately, not all clerics or scribes entered any information in this column, even though the header was preprinted in the record book, as illustrated below.  The scribe merely put a scribble through the two columns and supplied no information on the actual cause of death.

But more importantly, if the person completing the record did enter an actual cause of death, where do you find the information to provide you with an accurate translation and understanding of your ancestor’s demise?

The image below shows three common illnesses that I found in a death register of the late 19th century:  Wassersucht / Schwindsucht / Altersschwäche.  It is unlikely that you will find these ailments in 21st century records.  (Wassersucht is dropsy; Schwindsucht is consumption, and Altersschwäche is weakness of old age.  These are not diseases from which one dies in the 21st century.)

So, where does one go to find out the cause of death?  Since language, like medical science, is an ever-evolving entity, modern German-English dictionaries or online translation services may be of little assistance.  But don’t despair!  There are great resources available to help you.  The first two are print resources, both of which, I truly believe should be on the bookcase of every German genealogy researcher who deals with old German records:

The Bentz book has six pages in a section entitled ‘Glossary of Illnesses Found in German Church Records’ that list the disease in Roman print and in Kurrent script and provide English, Latin, and Danish equivalents.  Sad to say this book is not readily available for purchase.  Even on Amazon.com, the one listed goes for almost $500!

The Thode dictionary has typical German to English dictionary entries and may not have as many illnesses indicated as the Bentz work.  But, it is available and retails for approximately $40.

There is hope online for less costly resources, however!  A very comprehensive list of old medical terms is provided in Rudy’s List of Archaic Medical Terms.  One Rudolf Schmidt has compiled a very lengthy list of maladies and also includes German terms for anatomy, phrases and words associated with death, as well as types of accidents.  To the left is a sample of the entries for the letter T. 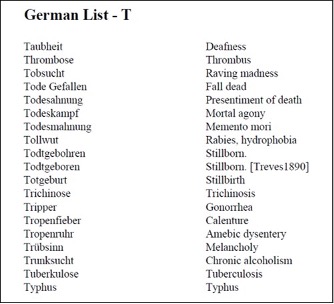 When I originally stumbled upon Rudy’s reference work online a few years ago, it cost $3.00 to download, but current readers are in luck!  It is now free in a variety of formats including Word and PDF.

One last idea to cover on the morbid topic of death is the unique German custom of display ads in newspapers, known as a Todes-Anzeige.  While readers are not going to readily find these for ancestors who passed away in the 17th and 18th centuries, there is some hope that for those who died in the 19th and 20th centuries.  They are rather ornate and decorative and usually provide some life information on the deceased as well as an invitation to the burial services.  They are typically ‘signed’ by the grieving heirs, those left behind.  Below are two such examples from the 1890’s: 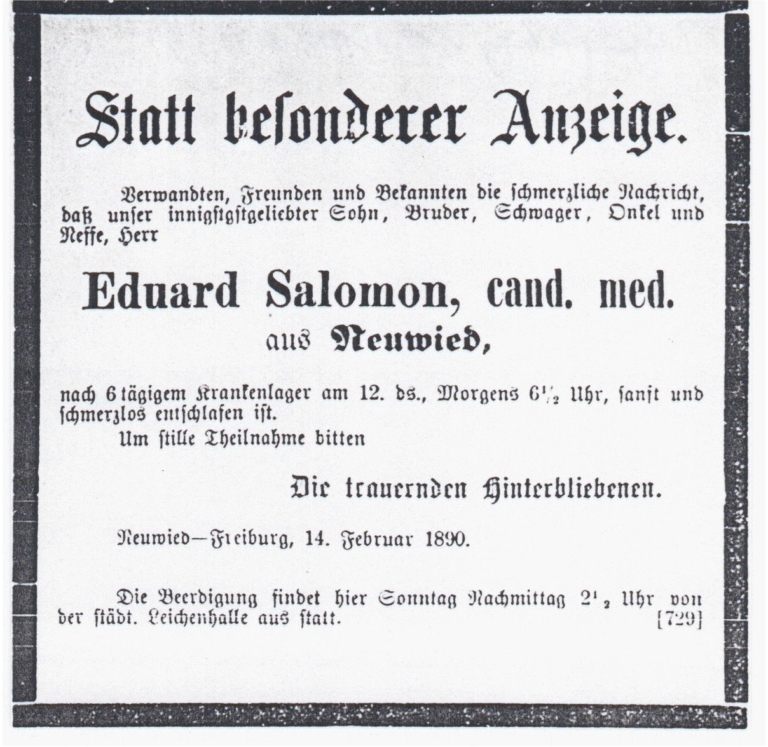 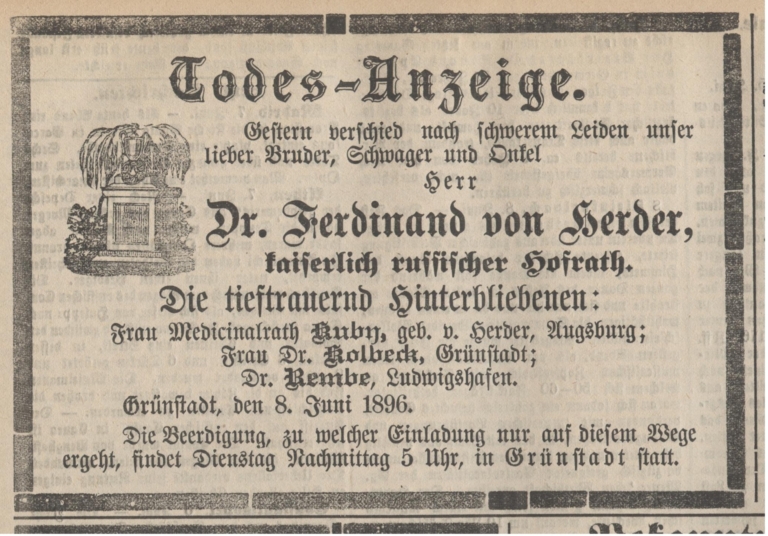 Hopefully, this article has helped you to better understand the information you may find in your ancestors’ death and burial records and newspaper notices.  While certainly not the most pleasant topic to discuss, it is one that is part and parcel of being a German genealogist!

To see an additional post by Ken, check out Taking a Stand: Understanding the German Word “Stand“. Premium Members Only –  must log-in to view. 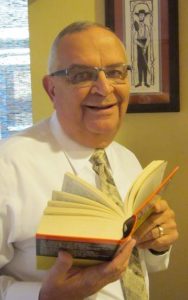 As a native Pennsylvania Dutchman, Ken Weaver can trace most every line of ancestors to an 18th century German or Swiss immigrant, so it was only natural that he learn to speak German and did so in high school under the tutelage of an inspiring immigrant German teacher.  Majoring in German at Millersville University, he also studied at Philipps-Universität and upon graduation began a career as a German teacher.  He went on to become a principal, but continued his language studies by earning certification in ESL.  Upon retirement from the public education, he taught at the university level until recently moving to Florida.  Now he works on his genealogy, and as a member of several different societies, spends considerable time teaching language tips to any genealogist who’ll listen!  He can be reached at kenneth.n.weaver@gmail.com.