Have you ever found a mystery letter in your attic or basement? Or inherited a letter from a mystery author? How do you go about finding who that author  was?

Since about 2002, I have been researching my Breimayer and Smith ancestors and relatives. I have traced my Breimayer ancestors back to the mid-17th century in the present day Biberach district of Wurttemberg. As is typically the case, there are many undated and unnamed photographs and a few letters from unknown persons inherited from both the Breimayer and Smith sides of my family.  One such letter is this 1948 letter from “Carla” in Trier to my deceased aunt Esther Breimayer Kennedy and my uncle Raymond Breimayer. My curiosity was piqued  – who was this Carla? And how could I go about finding her?

Below, see a copy of the letter, written in English in post-war Germany from our mystery author “Carla”. 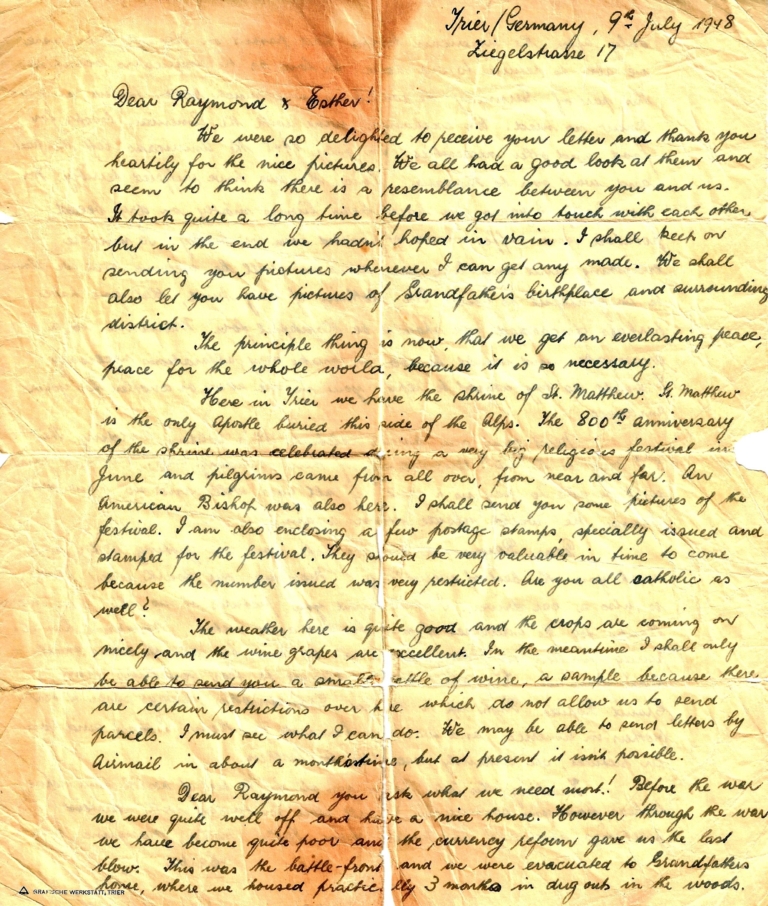 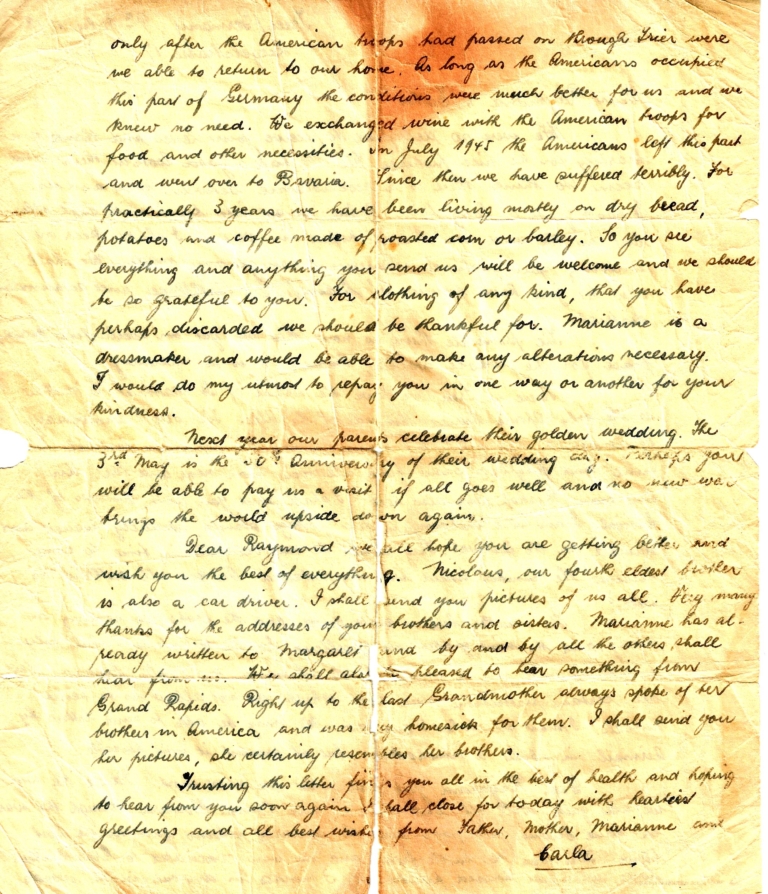 The Search for Carla Begins

The letter was found in the files of my uncle Raymond Breimayer following his death. Despite the lack of any known Breimayer contact with Trier, I reflexively thought that Carla was a granddaughter of a yet unidentified sister of my great-grandfather Ferdinand Breimayer.  While I wasted some effort working with researchers in a Württemberg genealogy group to identify who I thought of as the mysterious sister, they did point me in the right direction. Based on the letter address, the group directed me to a Trier city address book for 1930/31. This address book identified the occupants of the Ziegelstrasse 17 address as an Eichhorn family, which included Karola Eichhorn. Not the Breimayer family after all, but  this was the clue I needed!

I then thought that Carla’s grandmother who “missed her brothers in America” (Ferdinand was the only male emigrant in the Breimayer family) must be related to Mamie Kopp, the mother of Ray, Esther, and Marguerite Breimayer, all of whom were named in the letter. Now to find confirmation…

As luck would have it, a simple Kopp family tree search in FamilySearch identified  the siblings of Peter Kopp. One sister was a Susanna Kopp, who married Michael Eichhorn. A match with the inhabitants of the letter’s address  – success!

The Kopp tree also identified a brother Jacob Kopp, who died in Michigan and corresponded to a Jacob Kopp interred in Grand Rapids, Michigan.  That fit the reference to Grand Rapids in the letter from Carla, which had puzzled me before.

Fortunately, a number of Trier address books published from 1894 to 1930/31 are accessible. These address books identified Johannes Mathias Eichhorn (Carla’s father), as a “postbote” or “postassist”, daughter Marianne as a tailor, daughter Karola as an accountant, and son Nicholas as a chauffeur, all fitting the letter.

Were There Any Living Eichhorns in  Trier Today? If So, Could I Contact Them?

I then looked for a contact in Trier who could help identify any living Eichhorn descendants and found a great help in Karl Oehms of the Westdeutsche Gesellschaft für Familienkunde eV.  That group had compiled Kopp and Eichhorn family trees in the region that were more complete than the FamilySearch trees. Karl Oehms also found Carla Eichhorn in a 1950’s Trier address book (not online), contacted her living relatives, and put me in touch with Jörg Mergelmeyer.  Jörg asked other family members to help me locate any related correspondence that Carla and her sister may have had with Breimayer and Kopp family members and directed me to Egon Mergelmeyer, Carla’s nephew.

Both Egon Mergelmeyer (a son of Carla’s sister Magdalena) and Jorg Mergelmeyer, Egon’s nephew, provided information about Carla and her family but could not find any letters or photos that Carla may have received from my aunts and uncles and possibly her Grand Rapids relatives because any correspondence Carla may have kept was misplaced following her death. That being said, I was still happy to be in touch with them.

Turning to the letter, everyone who reads it remarks on the perfect English grammar and elegant cursive handwriting.  I thought that it might have been written by a professional who translated Carla’s draft or dictation. The stylized “D” and “R” in “Dear Raymond” suggest to me that the writer was German.  I was assured by another German friend and genealogist that in her youth, in that time, Carla was likely taught classic English grammar and would have been sufficiently proficient in English to handwrite English grammatically correct and with the elegant cursive style. Jörg Mergelmeyer believes that Carla was capable of writing the letter herself.

In the letter, “grandfather” was Michael Eichhorn who lived in Igel, which is a small historic village with a famous Roman column situated on the west bank of the Moselle River in the Moselle wine region, just about 10 km SW from Trier city center and 10 km west of Obermennig.  The back side of the Roman tower, the Moselle and a hillside are visible in the  photo below. 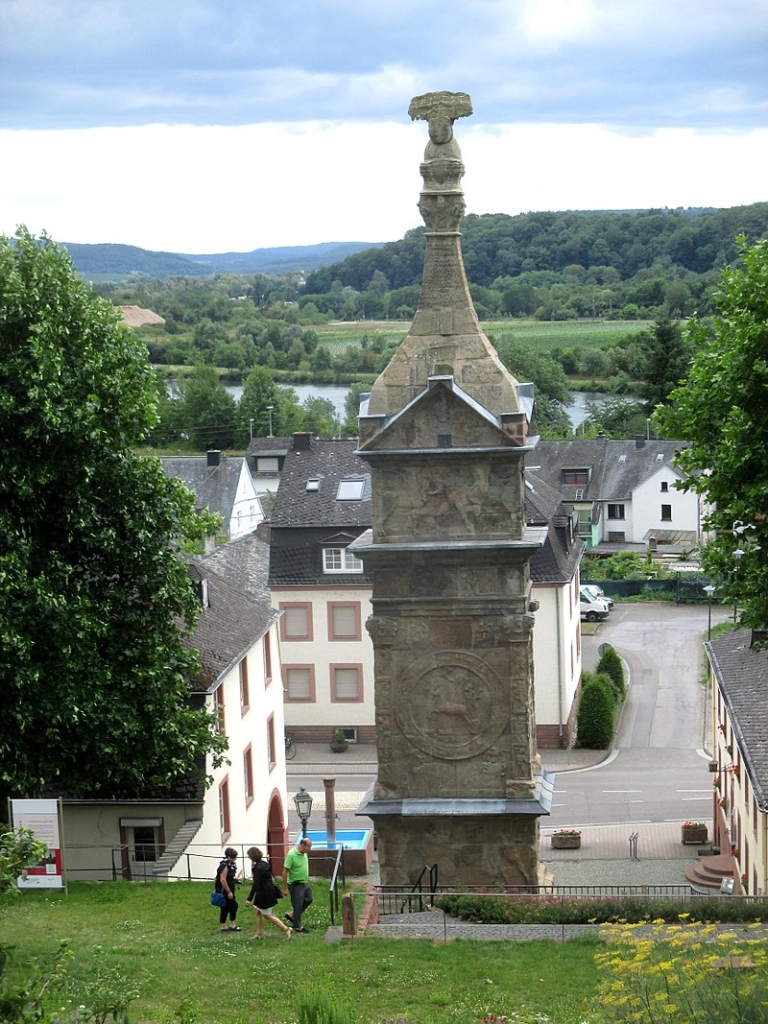 Carla mentions that the “crops are coming on nicely and the grapes are excellent” though it is only July 9.  She describes living for three months on the farm in “dugouts” in the woods while the city was bombarded prior to the arrival of the American 10th Army Armored Division on March 1, 1945, where only about 4,000 of the 88,000 residents remained.  Google maps show wooded tracts in the hilly areas rising above Igel where the dugouts may have been located.

Carla goes on to describe exchanging wine for food and necessities with American troops and their privations after the troops moved on to Bavaria in July 1945.  She also mentions how the currency reform, which was instituted on June 20, 1948, destroyed their wealth.  The German Reichsmark currency that was in circulation after the war ended was highly inflated and enjoyed little exchange value with the American dollar and other currencies.

And, in other parts of the letter, Carla appears to be quite hopeful and thankful for the pictures and clothing she has already or hopes to receive from Raymond and Esther.  She mentions the pictures and even a bottle of wine she is planning to send as well as the June 1948 celebration of the 800th anniversary of the shrine of St. Mathew in Trier.  She also invites Raymond and Esther to come visit in 1949 to celebrate the 50th wedding anniversary of her parents.

Carla states that she is enclosing postage stamps (which fits her father’s profession) commemorating the 800th anniversary of the shrine of St. Mathew.  When I shared this from the letter with my cousins, one told me that Esther had a box of letters with photos and stamps from German relatives, but a young niece found the box and proceeded to lick and apply the stamps to other things, so the stamps were destroyed.  When I provided the name Eichhorn, two cousins recalled that name and that help was sent to them by Esther or Raymond after the war.

In my youth I recall that Raymond frequently complained of intestinal distress (to the point that my parents considered him a hypochondriac).  Since Carla expresses her best wishes that he get better, Raymond must have made similar complaints in a previous letter to her.  From time-to-time Raymond was a car salesman and likely wrote about that employment or his car since Carla informs him that her brother Nicholaus (Klaus) is “also a car driver.”

Marianne is mentioned as having written to Marguerite and that she is a dressmaker that can make alterations to any used clothing, which fits her occupation listed in the city directories.

Finally, and very importantly, Carla states that she would be “pleased to hear something from Grand Rapids,” and that her grandmother (Susanna Kopp Eichhorn) missed her “brothers in America.” I am now confident that her missed brothers were my paternal grandmother’s father, Peter Kopp, and his brother Jacob (Jakob) Kopp, whose two stepsons and three daughters were alive and living in Grand Rapids in 1948.  Prior to investigating the Carla letter, I had not explored the Kopp side of my ancestry in any detail, although I was aware of some work done by other Kopp descendants.  This has led me to discover the Jacob Kopp relationship and the Kopp family members.

So Who Was Carla?

“Carla” was the nickname of Maria Carolina/Karolina/Karla Eichhorn born 16 Nov 1899 in Trier, who never married and lived with her parents until their deaths in the 1960’s; Carla died 22 Jul 1972 in Trier.  Carla was a granddaughter of Susanna Kopp Eichhorn, a sister of Peter Kopp, who was the father of my paternal grandmother Mamie Kopp Breimayer.  Carla appears in the photograph taken about 1915 with her mother, grandmother, and her surviving siblings (provided by Jörg Mergelmeyer). 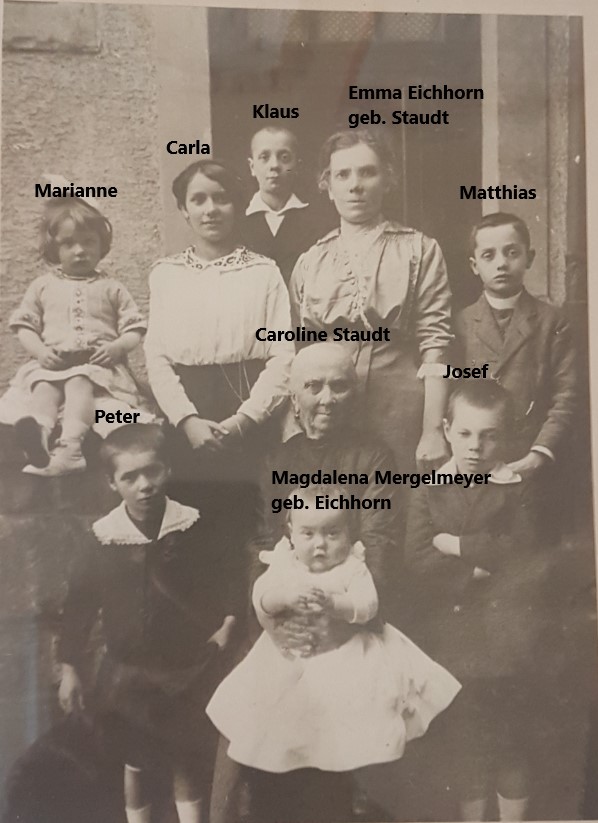 No other correspondence with Carla has been located.  I have not been able to reach any descendants of Jacob Kopp to ask if they had any letters from Carla or other Eichorns in Trier.  Somehow, in 1948, Carla Eichhorn tracked down Raymond, Marguerite, or Esther to initiate the correspondence and calls for help.  Possibly, Carla had learned their names from earlier family correspondence with Mamie Kopp before her death in 1937 and addressed her letters to the Breimayer farm.  Carla may have had the Grand Rapids addresses of Jacob Kopp’s children, all of whom were still living in 1948.  But they all died in the 1950s leaving few descendants.

Despite the remaining uncertainties, unraveling the source of this letter has been very satisfying.  I thank a number of people including Karl Oehms, the Württemberg researchers I initially enlisted, Mike Cronk who manages the Kopp Find A Grave Memorials in Mount Calvary Cemetery, Angela Yondo, another Find A Grave contributor and assistant archivist at the Grand Rapids Archdiocese, Jörg and Egon Mergelmeyer, and my cousins for their assistance.

Have you ever traced down the mystery author of a letter? Let us know in the comments!

ABOUT THE AUTHOR: Joseph Breimayer 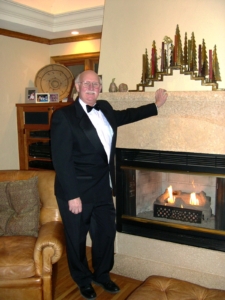 I am a descendant of Ferdinand and Agata Baur Breimayer who emigrated from neighboring villages Andelfingen and Friedingen in the present Biberach District of Wuerttemberg in about 1854, married about 1856 in Canada, settled with acquaintances and relatives in Freedom Twp, Washtenaw County, MI, in 1859, moved to Otisco Twp, Ionia County in 1877, and are interred in St. Mary’s Miriam Cemetery near Smyrna, Michigan, leaving eight offspring living at their deaths, most of whom are interred in the same cemetery. I have researched the family ancestry and descendants, and a summary appears on the Ferdinand Breimayer memorial 42883516 that I maintain.
I grew up on a farm in Otisco Twp and then in Belding, MI, obtained degrees in electrical engineering and law, and am now a retired patent attorney.  My employment took me to Germany on many occasions, but unfortunately I never became fluent in German.
Searching records for my ancestors and others is akin to searching the prior art of an invention determining whether it is patentable or assessing the validity of a patent already granted.  I specialized in locating obscure publications not considered when a patent application was examined thereby invalidating the issued patent threatening the interests of a client.
I take pleasure now in locating obscure references to my ancestors and linking relatives in family trees and on Find A Grave.  I am now trying to determine the names and dates on a trove of family photos and German letters left by my parents and grandparents.