If you are researching German ancestors who were in the city of Chicago or surrounding suburbs after the Civil War (1861-1865), then you may face challenges in finding records. Factors affecting your research can include destruction of records in fires, changing city boundaries and street addresses, and laws related to vital records collection.

Despite these challenges, there are helpful resources available for researching German settlers in late 19th-century Chicago. Before searching Ancestry or FamilySearch on-line databases for Germans who came to Chicago, it is helpful to have a basic knowledge of available source materials.

Question 1: Where Did My Ancestor Work and Live in Chicago?

Using time and place is a key strategy in establishing a genealogy foundation to tell your ancestor’s story. When direct evidence from a letter, newspaper, or another source shows that your ancestors lived in Chicago during the 19th century[1], finding an address can help you learn more. For example, it may lead you to find relatives with the same surname living nearby.

One place to find an address is in city directories. City directories can also lead you to find where your ancestor worked, if you know the occupation.  By establishing a location, you may also learn where the closest places of worship were, and this could lead to finding religious records. Below are my initial search findings for my own paternal ancestors.

One of the most interesting references for research in urban areas like Chicago are Sanborn Maps. The maps provide a picture at the neighborhood level of where homes, businesses, and other features (i.e., lakes, ponds) existed at the time period of interest. Sanborn Insurance Maps were created in the 1860s as aids to help insurance companies determine risk of fire and set insurance rates. Now, the maps are invaluable for doing family history research in the city of Chicago in the late 19th and early 20th centuries. Each of the Sanborn Maps has a key to help the viewer understand the annotations and colors.

While doing genealogical research on my paternal great-grandfather, I was able to learn through city directory searches, voter registration records in 1888 and 1890, and correlated primary records that he lived with his family at 351 N Southport Ave., Lakeview District. A lookup of Sanborn Maps (Figure 2)  in the Library of Congress Digital Collections (http://www.loc.gov/collections/sanborn-maps) provided the following street-neighborhood view of the area in 1894. 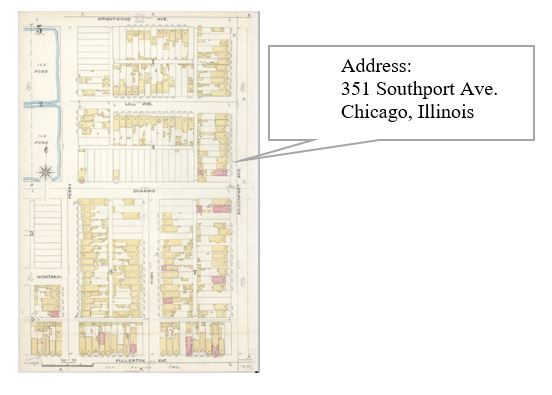 Question 2: When did My Ancestor Arrive in Chicago?

Cook County voting records from the 1880s and 1890s are a good source replacement for the 1890 US census that was destroyed in a 1921 fire in the basement of the Washington D.C. Commerce Building. Voting records can also provide information about naturalization status at the time of voter registration.

Figure 3: This excerpt from 1890 Chicago voter registration records indicates Aug. Rettammel was born in Germany and registered to vote October 9, 1888.[3] He has resided in Illinois for 26 years, in Cook County for 26 years, and in Precinct 1 of Ward 2 for 9 years. He was naturalized in 1875 in the Circuit Court of Cook County, Illinois. 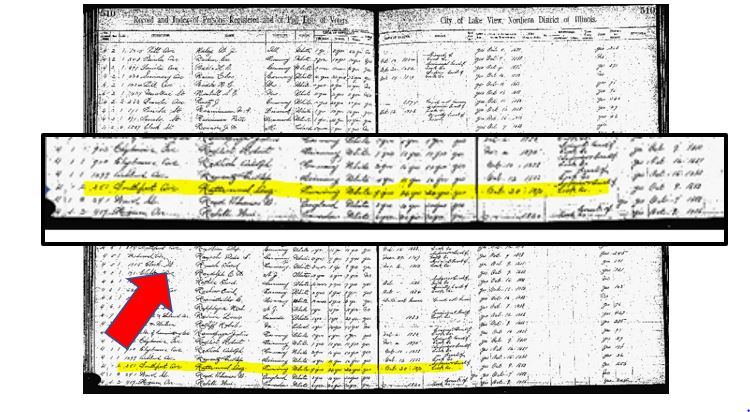 Question 3: What about Vital Records in Chicago? [4]

Starting with these Records

In the 19th century, many births were at home, with only a midwife in attendance. The birth would be recorded in the county by a doctor who made a later visit and saw the child. A typical Chicago birth recording in the 1870s provided the child’s name, number of children of mother, race, sex of child, date and place of birth, nationality and place of birth of each parent, full maiden name and residence of mother, full name of father and occupation, name of medical attendant, and date of registration of certificate.

Figure 4: My own search for my grandfather born on 4 June 1876 at 56 Hooker St., Chicago, Illinois. [5] Born to parents August Fredrick Rettammel and Louise (nee Felix) Rettammel.

Death certificates are accessible from 1871 and some of the records can be found on Ancestry.com or the indexes in FamilySearch. The records were issued by the Cook County Bureau of Vital Statistics and the original provides the full name of deceased, age, sex, marital status, occupation, date and time of death, cause, and the duration of illness or disease that was noted.

Figure 5: The author’s great-grandmother’s certificate of death record in 1890.[6] 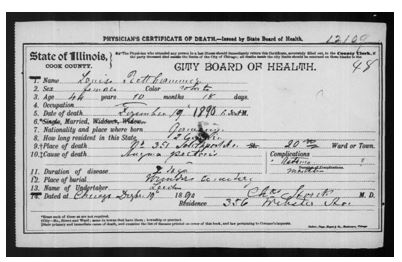 Also in the form was the street address for place of death with ward, nationality and place of birth, and the length of residence in state. The place and date of burial and the name and address of the undertaker are other items noted. All of these notations are important as you continue to learn more about your ancestor’s life in the past. In 1910, the names and birthplaces of the deceased’s parents were included on the death certificates.[7]

Marriage records in Chicago began in 1871[8]. The names and ages of the bride and groom, their respective town or city of residence, and the officiant are listed on the license. In the example below, the name of the minister is listed as W. Bartling [sic], that will help with the Rettammel family religious records and potentially lead to learning about the family in 19th century Chicago and other family members not known at this time. 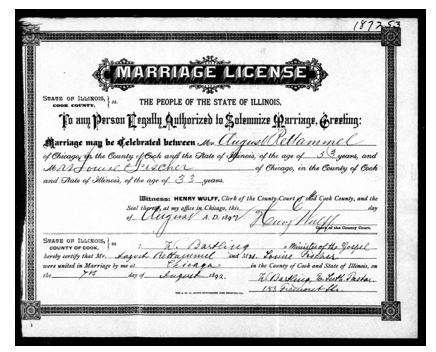 Question 4: How Do Religious Records Help?

Church records are a key source for learning more about individuals, as they can highlight details that a family historian may not otherwise find. For example, church records can include vital records and place of origin information. Since Chicago was a key destination for many German immigrants in the 19th century, key information for a researcher to find is what religion the family practiced during the date and time of the research focus. Sanborn Maps can then identify affiliated churches in the area where your ancestor lived. It is also key to learn if the church exists today, and if not, was the churched merged and records transferred and available today. Other resources for identifying churches and finding church records include those assembled by archivists at Newberry Library in Chicago. 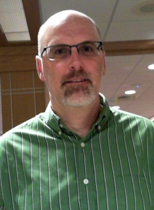 Hello, my name is Bob Rettammel, M.A., a professional genealogist based in Madison, Wisconsin. I became interested in family history in the summer of 1978 when I discovered a box of old family photos in my paternal grandparent’s house.

A facet of genealogy that interests me a lot is photo restoration and history of photographic processes. I specialize in German-American research but also work in all types of U.S. record sources and databases. I have a variety of clients including those looking for ancestry records in Dane County and other locations in Wisconsin and out-of-state archives. I have also worked on two research projects with the TV series “Who Do You Think You Are?”, Season 9 (2017), episode 5, and Season 10 (2018), episode 4.

Facebook Page for my business is Rettammel Genealogy Service, LLC. I also have a website at www.rettammelhistory.com 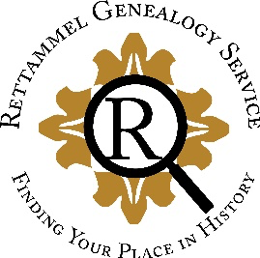 [1] In 1909 all residential streets in Chicago were renumbered. Prior to 1909, Chicago was comprised of divisions: North, South and West. This means you need to convert any address found if you want to see the actual property.

[4] A good reference to locate vital records in Chicago and Cook County areas is https://chicagogenealogy.org/Chicago

[8] Marriages in Cook County were indexed from 1871 to 1878 by the groom’s name. The Chicago Fire of 1871 destroyed all records prior to that year, so oldest year civil records are after that year.