In genealogy, the most important things are sometimes the hardest to find – which can be rather frustrating for genealogists. And place names are no different. Knowing where our ancestors come from is a major goal of most genealogists. But without any language context clues, deciphering the old German script in those town words can be next to impossible for many genealogists.

But all hope is not lost! Below, find four expert-level tips for deciphering those vital words for your research. 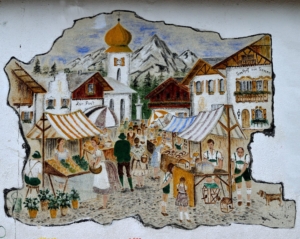 The first tip may seem like the easiest, but is also one of the most helpful. Type your transcription guess into Google Search Engine, along with any other defining clues you know about your location, such as “Germany”, “Austria”, “Prussia”, etc.  If you transcribed your place name correctly, many hits will likely pop up, and you can then confirm your transcription.

However, if you have a few letters wrong, Google’s “Did you mean” feature may be of help.  I  recently transcribed a document where the town name looked like “L-e-h-t” to my eyes. As I always double check that the town actually exists before I officially transcribe it, I typed my guess into Google, along with the word “Germany” after it to narrow the search.

There were no hits, but Google’s “Did you mean” feature suggested four possibilities for me. I looked at each of the suggested options, looked back at my handwritten word, and realized there could quite possibly be an “r” squeezed in there, and perhaps that swoop at the end of the word was a rushed “e –  Lehrte seemed the likely choice. I then checked where Lehrte was in Germany, and sure enough, it was very close to the other cities listed in my document. A match! Thank you, Google!

Meyers Gazetteer, a free online database consisting of over 200,000 villages, towns and cities in pre-World War I Germany (so yes, if your ancestor’s town was in present-day Poland or France, it will be there!) is an amazing tool. If you know that the word on your document is a place name, but can only recognize a few of the letters, type these letters into the site’s search engine, simply using an asterisk for the letters you don’t recognize.

Meyers Gazetteer will then provide you with a list of all possible places with your letter combination. Too many results? Narrow your search by German state in the drop-down box. This allows you to see all the towns in your specific region, and you can then compare the letters in these towns to the letters in your handwritten word and see if you have a match. 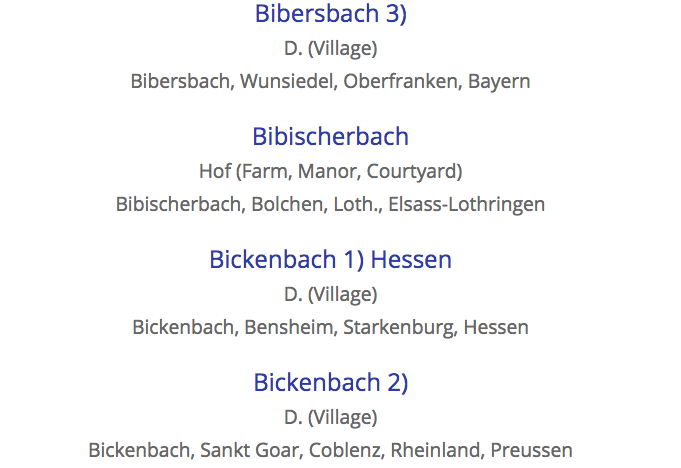 Above, I recognized the first two letters “Bi”, as well as the last four “bach”. I used an asterisk to represent the missing letters in the middle, and Meyers Gazetteer then provided me with a list of what the town name could be. As I knew my town was in Rheinland, I checked Bickenbach first – and sure enough, it matched my letters.

Meyers Gazetteer does not only offer a list of place names – it also includes both present-day maps and historical maps. This can be very helpful if you know the name of another town mentioned in your document – for example, if you are translating a marriage record, and you can read the groom’s town, but not the bride’s. It is very likely that the towns are close to each other (not for sure, but likely), so use the town name you already know as a clue.

In the left image below, I was having a hard time reading the city where the marriage banns of a couple were announced. However, I knew that another city mentioned in the record was “Wulkenzin”. I therefore typed “Wulkenzin” into Meyers Gazetteer, clicked on it, and looked at the map provided to see if any other cities were nearby that would match my letters (top right image). No luck with the modern-day map, so I simply clicked on this map to change the view to the historical version – and sure enough, a city named Gevezin appeared (bottom right image). As those letters matched my word, and the region was correct, I knew I had a match! Seeing possibilities for what my handwritten word could be was very helpful. 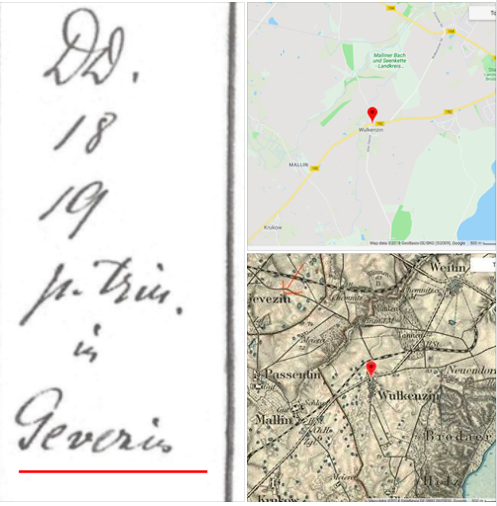 If your town is in Austria, Switzerland, or another place that Meyers Gazetteer does not include, you can search the area around the listed town with Google Maps!

If you are looking for a street name instead of a town name, a “Strassenverzeichnis” (index of street names) is the tool for you. Simply type the name of your town into Google, with the word “Strassenverzeichnis” after it. Click on the link that appears, which will usually lead you to a site with an alphabetical list, as seen below. If you recognize the first letter of your street, you can click on that, and scroll through the list to see if any of those streets match your handwritten word. You can also use the “suchen” box (search box) and try typing what you recognize in there.

If you don’t know the first letter, type the letters you do recognize into Google, with the word “Straße” (street) and the city name after it (hint: Str. is the abbreviation used for street. If you see “Str.” at the end of your word, that simply means “street” and is not part of the name itself). At this point, we would hope that Google’s “Did You Mean” feature (Tip 1) offers you some suggestions for what the street name could be. If not, it’s time to check your transcription again!

These four tips should be a great help to you in deciphering those tricky place names. By combining them and making the most out of what the internet has to offer, you should find your ancestor’s hometown in no time!