Have you ever used one of those old county histories that were so popular in the late 19th and early 20th centuries? They are always packed with historical facts about the county, the pioneers who first settled there, and the early businesses and industries found there.

Many of these histories also contain biographical sections, mostly about prominent families who lived there. It is important to understand that these biographical entries were usually written by the families themselves – and sometimes they could exaggerate. Therefore, I read the entry  about my ancestor with a grain of salt. By the time I finished, I needed the whole salt shaker!

I have numerous ancestors from the town of Quincy, which is located in Adams County, Illinois. Both my paternal and maternal lines were based there. My earliest ancestral couple was Johann Schehl and Barbara Zwick from Rhenish Bavaria, which was the region west of the Rhine River controlled by Bavaria. I was excited to find one of these biographies about them! It was quite a story…

Johann, Barbara and family left their town of Erfweiler by 1825. They went to LeHavre, France where Johann worked supervising the transfer of freight to and from ships. A son was born there in 1828 and they finally left in 1832, heading for New York City.

But here is the skeptical part. While in Le Havre, Johann apparently became acquainted with the famous American author, Washington Irving, who was on a tour of Europe at the time. He had come to Le Havre to embark for New York City. The biography states that Irving took a fancy to the 12-year-old son [not the son born there] and he took Johann Jr. back to New York, where he became a house servant. Irving and young Johann Jr. arrived in New York in April 1832; the rest of the Schehl family had left earlier and had arrived in March 1832.

Do I Believe This?

Now admit it, wouldn’t you also be a little skeptical of this story? But thinking that there might be at least some grain of truth here, I started looking for some evidence. I first went to our local university library, where I found Washington Irving’s autobiography. In going through it, I found the part of the book that spoke of this European tour and especially the part about being in Le Havre.

And in that autobiography, there it was! He mentioned Johann Jr. by name! And best yet, he also mentioned that they left France on 11 April 1832. That eventually led me to finding a passenger list. That being said, there were a couple of problems with the list. The first line had a black square over the first passenger line, covering the first name and part of the last name. But what is visible at the end of the name column is “gton Esquire”. You would expect a prominent passenger like Washington Irving to be listed first. But the thing that proved this was the correct list were two other names. In the biography, Irving mentions two traveling companions: Charles Joseph Latrobe and Count de Pourtalès. Both names appeared on the passenger list a few lines down from Irving.

But was Johann Jr. there? On a different page, I found “John Schnell, age 22”. Johann Schehl later in America became John Schell, so with similar pronunciations, this misspelling was not of a concern. Yet the age of 22 was. But after some consideration, I decided that could very likely be some kind of clerical error. The rest of the evidence is too strong to discount this due to just an age error.

So Did My Family Really Meet Washington Irving?

To me, this passenger list was really enough to convince me that my family did have this encounter with Washington Irving (for whatever reason). But then I found more! You can call this a moment of serendipity. I was scouring through Adams County land deeds looking for transactions about an entirely different ancestor’s land records. Something caught my eye….. the name Washington Irving! I thought to myself, “Why on earth would Irving have dealings in Adams County?” He lived in New York. This land transaction was in 1835. Was he buying this land for the boy who had worked in his household for a couple of years? John Schell Jr. was only 14 at the time of this land acquisition and could not legally own land. What to do?

The next step was to search through the index looking for another possible transaction several years later and there it was…. in 1846. Washington Irving sold the land he had purchased in 1835 to John Schell Jr! The land descriptions in the two deeds were exactly the same. This just turned out to be further proof of this encounter with Washington Irving.

And A Little Bit More...

I discovered one more bit of evidence that indirectly adds to the evidence of this Washington Irving connection. I was researching Quincy newspapers and found an article about John Schell Jr. purchasing Quincy’s second oldest hotel, the Gault House. John renamed it the Irving Hotel, which could easily have been to honor his friend.

Even though Washington Irving is not one of my ancestors, it was still exciting to find this connection with a famous American. The process of discovering the evidence to prove it is what makes genealogical research so captivating. You just never know what you will find around that next “bend in the river”! 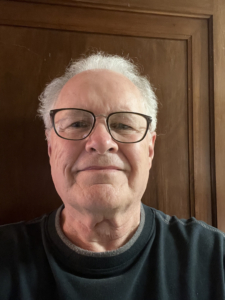 ABOUT THE AUTHOR: Steve Schell

I was born in Quincy, Illinois, but grew up in Waterloo, Iowa where I was a history and geography teacher for 33 years. I live in the neighboring community of Cedar Falls, Iowa. I began my genealogy quest about 2008 from a couple of family group sheets that I received from an uncle. That has led to several genealogy trips back to Quincy since both maternal and paternal ancestors lived there for several generations. In addition to research in Quincy, I have made several trips out to the Family History Library in Salt Lake City. This research also led to a trip to Germany in 2013 where I met a sixth cousin who took me to one of my many German ancestral villages. This never-ending journey has been fascinating; and I always look forward to new “buds” flowering on my family tree!